“We had a lot of fun – I think it’s important to have fun and laugh.”

This philosophy has propelled Sue Lindblom through nearly 44 years of owning and operating the pioneering West Seattle salon illusion hair design (5619 California SW; longtime WSB sponsor). So much fun that she couldn’t bear to retire until now. Illusions has just announced its permanent closure at the end of May. (Read his full email announcement here.)

“I thought I would retire at 65, or 67, or 68…here I am, almost 74. But those numbers are just numbers.” It’s not just his decision, his retirement. The entire Illusions team, with a collective century and a half at the salon, has decided to stop there, all planning to leave the hairdressing profession. “It was just the right time – it seemed like the right time for all of us.”

Lindblom operated Illusions differently than most other salons. No tip, for starters. But that’s only part of it.

She was 30 when she and her business partner at the time Linda Rhoton opened Illusions Hair Design on June 1, 1978, ten years after he started in the business. She became the sole owner when Rhoton had to take early retirement. “I didn’t think I would be doing this for so long.” Innovations from a former employer inspired her. “I was running this salon and I started thinking I could run one.” But it took about ten years before she started “different ways of doing things.”

She wanted to provide benefits – she was a single mother and well aware of the need for insurance, vacations, vacations. Instead of stylists renting chairs and operating as sole proprietors under a collective roof, everyone at Illusions worked as a team. No fighting for customers – they wanted them to be comfortable seeing anyone on the team. The cohesion has affected their salaries. “If we reach our goals in four weeks, everyone gets a bonus.” Financial information was also shared: “They knew exactly what we were spending on everything – how much we were spending on colors, how much we were giving to charity…a consultancy helped us get started on that. We slowly started to embrace all these different things.

And there was the big change. “When we stop tipping [more than 30 years ago], the stylists were more excited than the customers. The dominant attitude was, “I do my best for everyone all the time. The atmosphere was more relaxed than competitive. And, again, fun. “If your employees are happy, they will make customers happy.” This made Lindblom happy: “It has always done me good to take care of my team. I care about them all. She shared this advice during presentations to student designers: “I would tell people that I go to salons and sit there for a while and get a feel for the vibe. You spend most of your waking hours at work, it should be a place where you feel good. Education was also a staff activity – not just new hair techniques, but also communication techniques.

This has kept some clients coming back year after year – even some from his pre-Illusions salon, The beauty and the Beast. They also have second- and third-generation clients: “They’ve been coming since they were little, now we take care of them or their children. »

Something else that has spanned decades, along with operating practices and customers: community giving. For many years, Illusions hosted “Have a heart daywhere stylists volunteered their time so that all proceeds from discounted haircuts could benefit non-profit organizations. One of the first beneficiaries was the West Seattle Helpline (now part of the WS Food Bank). “It was so much fun that we asked about school supplies for the kids,” and that’s how pencil me for kids was born: Helpline connected them with family support workers who helped them find out what the children needed most, not just “a backpack full of stuff”. Lindblom joined the Rotary Club of West Seattle after the turn of the millennium, and Pencil Me In For Kids is now under the Rotary umbrella. “We work with public elementary schools,” as well as in partnership with Staples at Westwood Village, for prize giveaways and donated items. “It’s been very rewarding…I feel very good about it.”

Lindblom also feels good about being able to hold on to the pandemic. It was his birthday, March 16, 2020, when they had to close, by government order, for a few months. “I had just taken out a home improvement loan, so I was able to cover the payroll… The PPP loans also helped us.” She wants to be clear that the pandemic isn’t the reason for their closure — everyone’s just ready to move on. “If we were at a point where we had younger stylists, maybe there would be someone who would take care of that.” Instead, “Illusions fade into the sunset.” Many memories linger – holiday buffets for customers, Christmas dinners for staff, even a trip to the ocean. And everyone will accept the Mayor’s Small Business Award which Illusions won in 1997. Lindblom was also honored with the Great West Seattle Paradeis coveted Orville Rummel Trophy for Outstanding Community Service. The illusions made repeated appearances in the parade – you may remember the distinctive VW Bug: 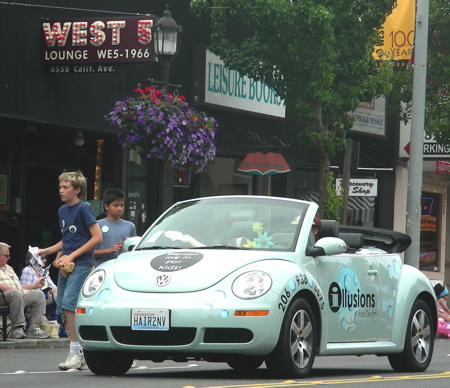 (BMS photo from 2007 West Seattle Grand Parade)
Also worth noting: The illusions “have been a family affair.” Her daughter heating worked at the salon for over half his life. Other relatives worked there. Her brother remodeled the salon – which brings to mind something else unusual that Lindblom did: she bought the building a long time ago to ensure the salon would control its own destiny and not be subject to change owner’s plans. She recently sold it; if the new owners choose to rent the space to a salon, “it will NOT be illusions”. (In the meantime, anyone interested in renting the space can drop her a message at Illusions, 206-938-3675.)

Now for a bit of logistics: May 26 will be the last day for Illusions. As it draws to a close, the salon is no longer accepting new clients. But, as stated in the ad:

-Current clients who have received services within the past 3 years can book appointments through April and can request appointments for May AFTER MARCH 14.

So what are Lindblom’s plans once Illusions closes? Maybe trips, although there’s plenty to keep her busy at home – Lindblom laughs, saying she has “a little time-consuming dog”. She is also always busy with Rotary. “So many exciting things about West Seattle.”

And that’s how she takes care of her business, her employees and her customers – for 44 years.