[Eye interview] Hairdresser turned artist, he realizes his vision in a mountain resort

Lee Sang-il speaks during an interview with The Korea Herald at The Art of Life in Icheon, Gyeonggi Province on June 7. (Jeon Jae-ho/The Art of Life)

ICHEON, Gyeonggi Province — When Lee Sang-il, 66, a hairstylist for celebrities, artists and lunching ladies, retired a decade ago, he hinted that he was about to embark on a very big project. “Keep me posted,” I said.

Over the years, he has indeed kept me updated with occasional text messages. And about five years ago, I received photos of a snow-covered hanok and an update: its compound was 90% complete.

Then came an invitation to opening night in early May. An hour and a half on a highway and winding country roads, an incredible scene unfolded. A massive concrete building stood at the foot of a gently sloping mountain across a babbling stream. Standing guard near the entrance to the station – L’art de la vie, which means “the art of living” – were the stone pillars that once stood inside Lee’s cafe in Sinsa -dong, one floor below her hair salon.

The imposing building at the entrance to The Art of Life is an art exhibition hall dedicated to Lee’s works – large-scale installations and giant panels of pencil drawings. It is part of the complex which has eight private accommodations, three hanok accommodations, as well as an Italian restaurant, a cafe and a Korean restaurant which will open soon.

The wine flowed freely at the garden party, where Lee’s former friends and clients gathered to congratulate him on opening a new chapter in his life. 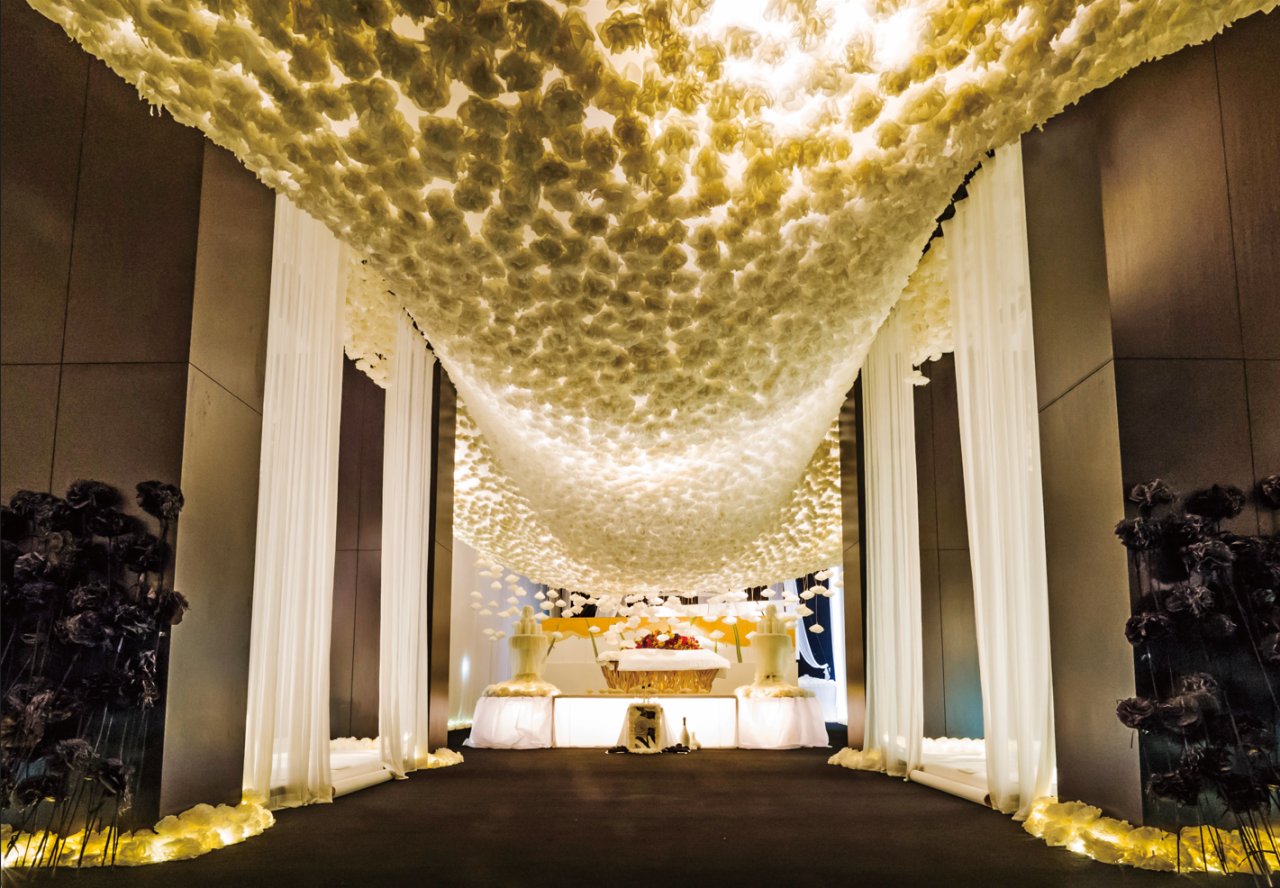 “Last Beauty,” an art installation by Lee Sang-il, is on display at the Art of Living Art Exhibition Hall in Icheon, Gyeonggi Province. (Jeon Jae-ho/The Art of Life)

“Over 400 people came to my parties,” Lee said when I returned to The Art of Living in Moga-myeon, Icheon, Gyeonggi Province on June 7 for an interview. He said he was grateful and touched that so many people had accepted his invitation. After all, it had been some time since he retired at the end of 2012, ending his famous career as a hairstylist after more than 30 years.

The decision to retire, a little early, was made after showing “Last Beauty”, his large-scale installation work depicting his death and funeral, at the Seoul Living Design Fair in 2012. At that time, he had been drawing for a few years, living in an old hanok in Oeam Village in South Chungcheong Province for part of the week, where he drew day and night.

Drawing was a newly discovered passion, occasioned by his wife’s move to Europe to study jewelry design. Alone at home after a long day at work, he once took an eyebrow pencil from his wife’s dressing table and began to draw on the back of a piece of used paper he had found in the living room.

Work on the station began in 2014. The land had been purchased several years earlier. “I was immediately drawn to the peach blossoms, the gentle slope of the mountain and the valley. When I turned over a rock in the stream, I found a freshwater crayfish. It reminded me memories of my youth,” he says.

The original plan was to build a small house where the couple would grow old, with Lee spending his days sketching. His wife, Kim In-sook, however, had a different idea. It would be a selfish luxury to have this beautiful place to themselves, she told him. “Let’s open up a cultural space,” he recalls, urging his wife. 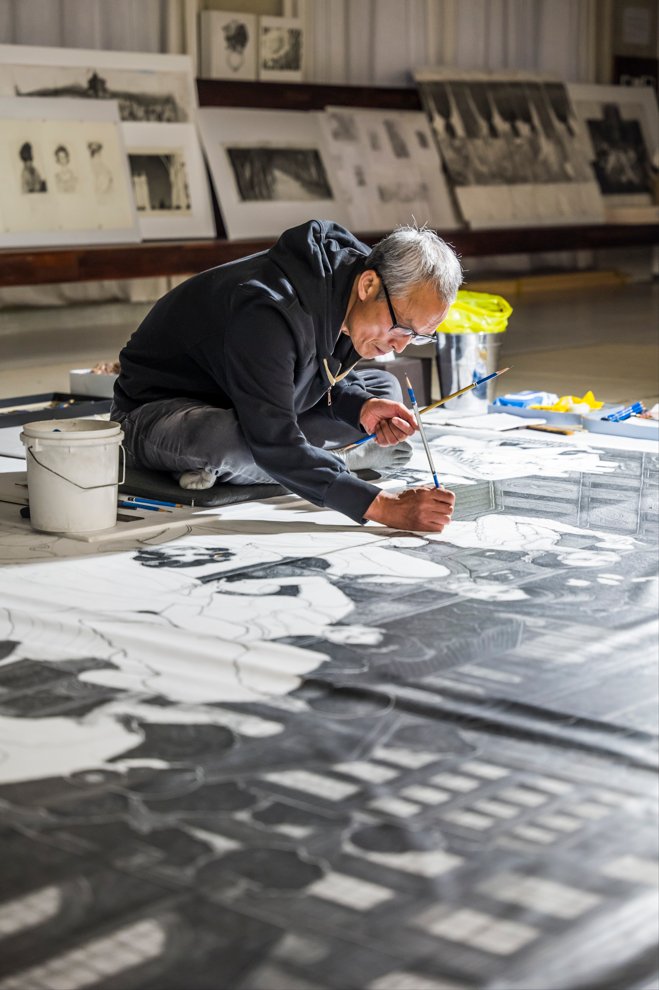 For two years, Lee has been busy preparing the ground, removing rocks and clearing fallen tree trunks, all by hand. He shows me his hands — not the hands of an artist, but of a day laborer — calloused and hardened.

His art is everywhere in the station. How did he amass such a large collection, I ask. He gets up well before dawn, he says. “I draw from 3 a.m. to 7 a.m.,” he says. His works are mostly large-scale pencil drawings requiring hours and hours of painstaking work. At 7:30 a.m., he begins to work on the station grounds.

“To keep the terrain looking natural, it actually takes a lot of work,” he says, explaining how the flowers in the meadow were planted to look as natural as possible. Red poppies have been strategically planted among other flowers, for example. “A garden is another way to express yourself,” says Lee, whose living room has always had a lavish arrangement of fresh flowers.

The preservation of nature and the natural integration of buildings into the environment was the main focus of Lee’s work. Lee designed all the buildings, including the brick dwellings and the hanok. He first designed the buildings, built them in collaboration with local builders and carpenters, and then had the plans drawn up after everything was completed so that the buildings could be certified by the authorities. He not only provided the vision for the project but also executed the project. This is not a surprise knowing that he is fussy about details. He had also gained a great deal of experience in the design of buildings, including his barbershops.

“Rocks, stones, trees, earth, water. They’re the ‘owners’ of that land,” says Lee, explaining his building philosophy. The art of living reflects this philosophy well. The large rock at the back of the art exhibition hall has been preserved as the focal point of the resort, and the restaurants, cafes and other larger buildings have been constructed without disturbing the natural mountain ridge. Piles were used for the brick dwellings so that the hillsides were the least altered. 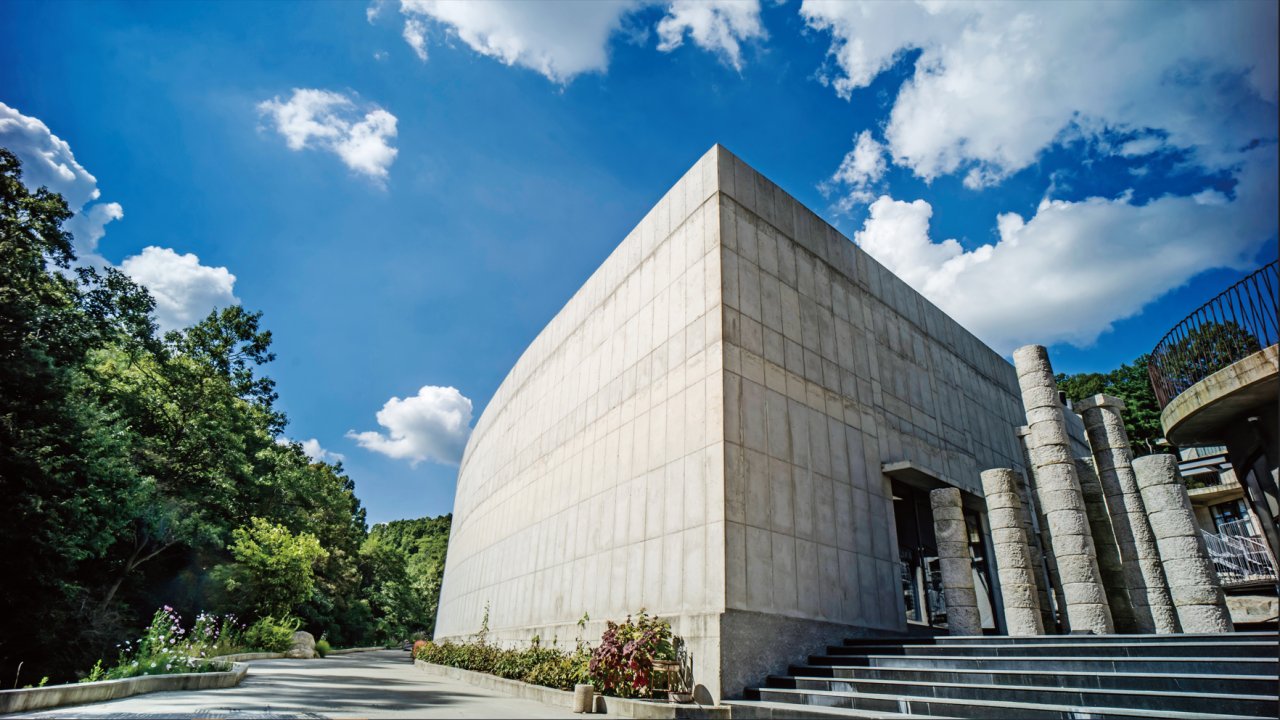 The couple’s extensive travels abroad, often to remote and exotic locations, even while working in the cutthroat beauty industry, served them well. Their influences are scattered throughout the resort, down to the colorful elongated sculptures of men wearing hats he brought back from a trip to Africa that stand by a cafe window. Most of the sculptures face the window, appearing to look outside, but a few have been rotated to look inside the cafe. Yet another attention to detail that is whimsical.

Of course, there were difficulties along the way. “I almost gave up three or four times because I had difficulty achieving my vision,” he says, thanking his wife for pushing him, encouraging him.

Lee looks the happiest I’ve ever seen him, a smile of contentment lingering on his lips, his eyes sparkling with childlike excitement. After all, he gave shape and form to his ideals and gained the freedom to pursue his interests.

Does he worry about the business side of things?

The only reason he was able to undertake this seemingly unlikely project was because it was understood that his children would not inherit his wealth, he explains. “All I want right now is to make just enough money to pay the staff,” he says.

In the meantime, he already has other projects brewing in his head. Transforming an abandoned mountain after being exploited into an art space is one of them.

“I think my talent is maybe creating spaces where you can develop new thoughts, new ideas,” he says. “I learned a lot by being in nature. I change every day accordingly and I hope everyone can change a little too by being in nature.